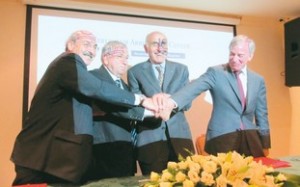 Last week I had the good fortune to attend a reception in Washington D.C. with various arbitration luminaries announcing the inauguration of the Jerusalem Arbitration Center.

With almost $5 billion in annual trade between Palestine and Israel, it is imperative to establish a neutral forum for resolving business disputes. JAC is established under the auspices of the International Chamber of Commerce. Zahi Khouri and Yara Asad of ICC Palestine and Oren Schachor and Baruch Mazor of ICC Israel were on hand to announce the partnership. JAC’s goal is to establish, in John Beechey’s words, “a truly neutral and independent forum.”

Catherine Rogers at Penn State has been actively involved in JAC’s creation, and she expressed to me her desire for arbitration to impact real people on the ground in conflict zones. As she put it,

“Israel is by far Palestine’s largest trading partner and, according to some estimates, Palestine is Israel’s second largest trading partner after the United States…. [W]hile politicians on both sides seem locked in an intractable battle against peace, peaceful exchanges occur every day between ordinary Palestinians and Israelis. Of course, some disputes arise out of these commercial transactions. In those disputes, Israelis have full access to the machinery of civil justice under Israeli law. Meanwhile, it can be exceedingly difficult for Palestinians to participate in the judicial proceedings in Israel, and Palestinian court judgments are generally unenforceable…. The JAC could provide a better alternative for Israeli-Palestinian exchanges.”

A video introducing JAC is available here. Kudos to all those involved in creating this new joint venture, which the ICC evocatively describes as the “merchants of peace” in the Middle East.