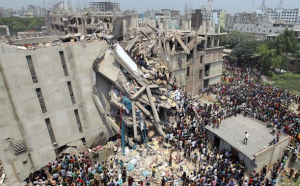 These tragedies could not have come at a worst time for major retailers that purchase garments from these factories. For months the International Labor Rights Forum and other labor rights groups have encouraged garment retailers to sign a binding agreement that would create a system of rigorous inspections, transparency and oversight. Thus far, they have had limited success, with only the parent company of Tommy Hilfiger and Calvin Klein brands and one German retailer signing on.

The agreement, the Bangladesh Fire and Building Safety Agreement, would establish a nine-member Oversight Committee, with four members appointed by Bangladesh and international labor groups, four members appointed by business representatives chosen by companies sourcing from Bangladesh, and one member mutually chosen by the other eight. Corporations that sign on to the MOU would help fund the costs of improving fire and safety standards in the factories where they source their supplies. As reported by the New York Times here,

The companies would bear the costs of improvements through higher prices for clothes and grants to workers who miss workdays because of renovations. The cost of the inspection program to each company would vary by the firm’s size, but it would be capped at $500,000 a year…. Labor groups say a roughly 3 percent annual increase in prices paid to the factories would be sufficient to make the needed improvements.

A key provision in the Agreement is binding arbitration. Specifically, the Agreement requires the Oversight Committee to develop a plan for the implementation and administration of the Bangladesh fire and safety program that includes “[a] process for binding and legally enforceable arbitration of disputes between parties to this MOU with respect to this MOU and the program….”

In other words, labor unions and participating corporations would sign a binding agreement to improve the working conditions of Bangladeshi garment workers, and any corporation that failed to comply with its funding or other obligations under the MOU could be the subject to international arbitration enforceable under the New York Convention in that corporation’s home country.

I have long advocated the use of international arbitration to address human rights concerns such as core labor rights. As I argued in “Arbitrating Human Rights“:

“[O]ne can anticipate that many corporations will increasingly include core human rights and environmental standards as contractual covenants in their international agreements. These contracts will also include grievance procedures, including arbitration, as a com­mon mechanism for dispute resolution. Serious noncompliance with substantive contractual obligations will trigger invocation of the dispute resolution provisions. Thus, by contracting for human rights as a substantive obligation and contracting for arbitration as a procedural guarantee, corporations throughout the globe can establish a firm basis for the promotion of human rights within their spheres of influence.”

In order to incentivize corporations that source their garments from Bangladesh, large wholesale and institutional buyers and IP holders, such as colleges and universities who purchase garments or license trademarks, can require these corporations to sign reasonable labor agreements such as the Bangladesh Fire and Building Safety Agreement as a condition in their agreements. In other words, upstream contracts can require downstream supply chain labor rights.

Tragic events like the death of 170 and 112 garment workers—a death toll that is over ninety times greater than that of the Boston marathon bombings—should be sufficient incentive to sign MOUs like that proposed in Bangladesh to improve the working conditions of garment workers who earn just over $1 a day.