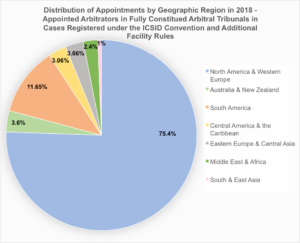 The Code should also exercise caution when equating arbitrators with permanent judges for the purposes of double hatting, as the two roles substantially differ. Permanent judges, such as those in the Comprehensive Economic and Trade Agreement (CETA) International Investment Court (ICS) or the proposed multilateral investment court (MIC), hold tenured office with two-tiered permanent courts, and are assigned to cases on a random and rotational basis without the parties’ input. And they are remunerated on a regular basis. On the other hand, ad hoc arbitrators are appointed by the parties for a specific case and are remunerated on a case-by-case basis, each subject to its own conflict of interest determination. Such distinctive elements are usually what differentiate between international judicial settlement and arbitral settlement.1) See C. Ranjan Amerasinghe, Jurisdiction of International Tribunals, The Hague, Kluwer Law International 2003, pp. 19-20 (Noting that the existence of a permanent structure with tenured pre-selected judges hearing cases on a rotation basis – as opposed to party appointed ad hoc arbitrators – with an institution and secretariat are usually considered as elements that differentiate judicial settlement from arbitral settlement of international disputes.). To illustrate the difference, the EU describes the MIC as bringing features of “domestic and international courts” with selection of judges similar to the International Court of Justice and remuneration comparable to judges in international courts.2)European Commission, ‘Impact Assessment Multilateral Reform of Investment Dispute Resolution’, SWD (2017) 302 final, 13 September 2019, p. 40. The CETA and the International Court of Justice prohibit multiple roles given that the judges serve on a permanent basis and perform roles more akin to judicial public functions.3)See Article 17, Statute of the International Court of Justice, 1945. On the other hand, arbitrators perform more private functions and their conflicts of interest are assessed on a case-by-case basis. Indeed, Todd Weiler has argued that “individuals acting as arbitrators are professionals offering a private service – not officials performing a public service – and that there should be no bright-line prohibition against individuals practicing as arbitrators and counsel contemporaneously.”4) The same query on treating arbitrators as permanent judges should also be scrutinized with respect to the proposed limit on the number of ISDS cases in the controversial Article 8.2 as to how such restrictions could be applied to permanent judges. The number of judges is slated to be fixed and a standing court cannot predict ex ante how many cases will be on the court docket at a given time. Moreover, there has been no allegation, that the existing rules and institutions are unable to manage conflict issues,5)See Republic of Ghana v. Telekom Malaysia Berhad, District Court of The Hague, Challenge No. 13/2004, 18 October 2004; Vito G. Gallo v. Canada, NAFTA/UNCITRAL, Decision on the Challenge to Mr. J. Christopher Thomas, QC, 14 October 2009. nor is there sufficient justification for such radical departure from a time-honored practice when less drastic measures are available to mitigate any conflict issues.

Barring individuals who serve as counsel in ISDS proceedings from serving as arbitrators in investment disputes would reduce the overall pool of potential arbitrators, notably women and those from other regions, and deprive the parties of the ability to select the arbitrators of their choice. Moreover, if the arbitrator pool is not sufficiently appealing, it may attract less-qualified candidates, as the best talents may opt for the more lucrative role as counsel. Therefore, any outright ban of multiple roles simply because it is “easier to implement” should be discouraged.  Indeed, Comment 68 should be highlighted, which identifies the barrier to entry as “especially relevant for younger arbitrators (new entrants) and arbitrators who bring gender and regional diversity.” Thus, great care is needed to ensure that the cost of prohibiting double-hatting does not outweigh the impact on diversity. Proposals for a grace period or a “time phased” approach for new arbitrators have been made. However, it would be difficult to implement in practice. Narrowly tailored disclosures, similar to the International Bar Association Guidelines on Conflict of Interest or disclosures,6)It should be noted that Article 5.2(c) of the Code already contains disclosure rules on any role, including that of counsel: “All ISDS [and other [international] arbitration] cases in which the candidate or adjudicator has been or is currently involved as counsel, arbitrator, annulment committee member, expert, [conciliator and mediator]”. See also disclosure in ICSID, ‘Proposals for the Amendment of the ICSID Rules,’ Working Paper #4, Volume 1 Schedule, p. 241.  Indeed, the failure to disclose an arbitrator’s relationship to one of the parties’ expert during his previous role as counsel in unrelated cases has recently resulted in the annulment of an award.  See Eiser Infrastructure Ltd v Kingdom of Spain, ICSID Case No. ARB/13/36, Decision on the Kingdom of Spain’s Application for Annulment, 11 June 2020. would be more suitable and in line with international practice.