The two worlds are not that apart. In March 2021, UNCTAD released a report which addresses the potential implications of International Investment Agreements (IIAs) for tax-related measures. According to UNCTAD, both the IIAs regime and double taxation treaties (DTTs) address similar challenges, eg. indirect ownership, mailbox companies and time-sensitive restructuring. The report emphasizes that some tax policy measures may “provide insight for harmonizing the treatment of indirect ownership and for reducing the potential for treaty shopping in both tax and investment policy making”.

In parallel, the OECD published a series of measures designed to prevent aggressive tax planning (BEPS project). Some of the measures are to be implemented in double taxation treaties (DTTs) and consequently, 96 jurisdictions have signed a Multilateral Convention (MLI) to modify more than 1,200 DTTs. The MLI includes inter alia the “Principal Purpose Test” (PPT rule), a new general anti-abuse rule designed to defeat treaty shopping. The PPT rule is the single best example, which illustrates the potential of DTTs to impact the IIA regime.

This post aims to assess whether this new clause in the existing DTTs may impose restrictions on nationality planning in the area of IIAs. To that end, it starts by outlining the key elements which distinguish DDTs from IIAs. It then addresses the issue of treaty abuse in the field of international taxation with a focus on the PPT rule. It concludes by assessing to what extent this new anti-abuse clause in DTTs may restrict nationality planning under IIAs.

The vast majority of DTTs are bilateral in nature. One of their main purposes is to foster the development of economic relations between the contracting States by eliminating double taxation which may arise among them when each contracting State applies its domestic tax law. DTTs eliminate double taxation by allocating taxing rights among the concerned States and by employing credit mechanisms. 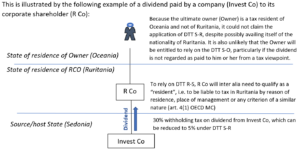 At this stage, it is important to emphasize two differences with regard to how IIAs and DDTs operate:

In the field of DTTs, treaty shopping can be defined as circumstances where a person who is a resident of a third State acts through a legal entity located in a contracting State to obtain treaty benefits which would not be available directly. It is regarded as inappropriate, because it results in DTT benefits being in effect extended in a way unintended by the parties to the treaty.

Similarly to IIAs, DTTs include various types of clauses which aim at preventing treaty shopping. One of these clauses is especially pertinent, because it will seem familiar to every investment treaty law practitioner or scholar – the PPT rule.

The PPT rule focuses on the reasons why a specific arrangement is implemented. Regarding ownership structures, it provides essentially that a holding company will not be in a position to claim the application of a DTT if one of the principal purposes of setting up or maintaining this entity is to obtain such benefits:

“Notwithstanding any provisions of a Covered Tax Agreement, a benefit under the Covered Tax Agreement shall not be granted in respect of an item of income or capital if it is reasonable to conclude, having regard to all relevant facts and circumstances, that obtaining that benefit was one of the principal purposes of any arrangement or transaction that resulted directly or indirectly in that benefit, unless it is established that granting that benefit in these circumstances would be in accordance with the object and purpose of the relevant provisions of the Covered Tax Agreement” (Art. 29(9) of the 2017 OECD Model Tax Convention on Income and on Capital).

According to the OECD MC Commentary, “principal purposes” would often mean the availability of qualified human resources in the State of residence of the direct owner to carry out investment activities and in any event coherence with a business model. Absent such reasons and/or business rationale, the tax authorities of the host State could reasonably conclude that one of the principal purposes of setting up or maintaining a holding vehicle was for this entity to be entitled to rely on a DTT to reduce the host State’s taxing rights.

The following example illustrates when a holding vehicle may rely on the network of DTTs of its State of residence:1)OECD MC Commentary, Art. 29, para. 182, example K. a Fund located in Terraria decides to set up an entity (RCO) in Ruritania to own and manage investments located in a regional grouping countries Ruritania is a member of. The decision to establish RCO in Ruritania is mainly driven by the availability of directors with knowledge of regional business practices and regulations, the existence of a skilled multilingual workforce, Ruritania’s membership in the regional grouping and its extensive DTT network. RCO employs an experienced local management team to review recommendations from the Fund to perform other functions including maintaining RCO’s books, and ensuring regulatory compliance in states where it invests. The board of directors of RCO is appointed by the Fund and comprises Ruritania’s residents with expertise in investment management, as well as members of the Fund’s global management. RCO now contemplates investing in SCO, a company resident of Sedonia. Under Sedonia’s tax law, dividends paid by SCO are subject to a 30% withholding tax. Under the DTT S-R, this tax could be reduced to 5% whereas on the basis of the DTT S-T, the residual rate would be 10%:

Here, the reasons for establishing RCO in Ruritania as well as its investment functions support the fact that claiming the benefits of the DTT S-R was not the principal purpose of the decision to invest in SCO. Hence, the benefit of DTT S-R should not be denied under the PPT rule.

The introduction of the PPT rule simplifies ownership structures, whereby tax haven jurisdictions are likely to lose in attractiveness. This conclusion is supported by the following:

What is Left for Nationality Planning?

Experience shows that tax issues are always looked at in great details when designing or revisiting ownership structures. Therefore, new anti-abuse requirements resulting from the PPT rule will inevitably impact how investors own assets. And as mentioned, these new provisions will simplify structures, whereby greater attention needs to be paid to economic substance and business rationale.

Quite logically, the more limited the number of entities in an ownership structure, the less room for nationality planning from the perspective of IIAs. Hence while the PPT rule may not bring nationality planning in the area of IIAs to an end, it will certainly reduce its scope. And that will happen even absent corresponding provisions in IIAs.

Interestingly, substance requirements resulting from the PPT rule may also strengthen the position of potential Claimants when claiming their qualification as “investor” and the concept of “contribution” (eg. OI European Group v. Venezuela, paras. 239-242).

More fundamentally, this also illustrates the interactions between international tax and investment law and how policy developments in both areas can impact each other despite each regime having its specific reform priorities. This also emphasizes the increasing need for a dialogue between tax and investment communities, both on the side of policy makers and of investors as well as their advisors.

More than ever, investment structuring ought to be addressed in a holistic fashion and timely manner!