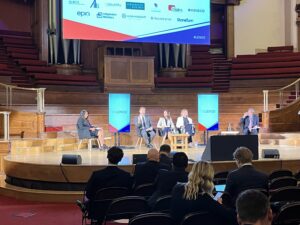 The panellists offered a very rich debate. They examined London’s strengths and weaknesses (perceived and factual), reflected on any viable long-term threats to the city’s leading position on the global stage, and considered the available opportunities for London to continue to thrive and ensure future success in all forms of dispute resolution, including litigation.

All members of the panel agreed that London is a hotspot for legal and technical expertise (i.e., inclusive of engineers, accountants, and scientists).

In particular, there is a real “diversity of specialist skillset”, from full-time arbitrators to specialised judges, maritime engineers, architects, specialized societies, counsels, accountants, and mediators. This diversity offers a great asset to litigants, who can draw upon these experts while also relying on a system of courts and arbitration institutions that are both of an excellent level and highly responsive.

Two examples of London’s excellence were given by a panel member:

To that panel member, these two examples constituted clear evidence of the diversity and quality of services litigants find in London.

The panel then addressed the diversity of gender, ethnicity and socio-economic background of London’s disputes environment.

One panel member noted that the presence of women on panels and talks did not reflect the reality of the legal profession. While it was important to set an example, there were still important inequalities in the profession, which are showcased by recent reports on gender and ethnic diversity. Statistically, women and ethnic minorities still face a “glass ceiling” in their careers. In particular, the lack of inclusion of black and black British students was criticized. Significant hurdles and obstacles were pointed out. It was argued that law firms and the pool of experts had to work towards greater diversity at three stages: (1) outreach in schools and universities, (2) recruitment and (3) retention and progress.

The panel welcomed London’s improvements on diversity issues but recommended that the legal profession aim to avoid exclusionary behaviours, create more demand for ethnic minorities in university degrees and maintain career momentum for professionals who are also balancing family obligations.

In short, a diverse pool of legal and technical experts is not sufficient. It is essential to developing gender and ethnic diversity to attract and retain talents and for London to continue to be a leader in international dispute resolution.

London – Costly but Worth It?

Another topic was the cost of legal proceedings in London. According to a panel member, when asked if the city was expensive, the litigants’ answer is a clear ‘yes’. The reason why London is expensive was twofold: experts’ costs are high and English law is expert-intensive, and London is expensive for physical hearings.

However, the panel members recognised that the cost reflected the general quality of service offered in London. They also acknowledged that, compared to the laws of other jurisdictions, London courts offered the possibility to recover costs. The possibility to obtain summary judgement and the English cost regime were thus seen as decisive factors for London maintain its place as a leading venue for litigation and arbitration.

Similarly, the panel members emphasised the speed at which English courts were capable of adapting to unforeseen circumstances, such as the Covid-19 lockdowns. They also praised the technological culture of English courts and cited the example of paperless proceedings. They expressed the view that the judiciary was very proactive in London – for example, devising novel ideas on how to improve litigation procedures and finding ways to make them faster, modern and global.

London – The Flexibility of Precedence

One panel member expressed the view that “English law is our greatest export and asset”. Since it is not based on a code, but on principles, and methods, it was argued that judges were well equipped to adapt to the changing conditions of the commercial world.

Another panel member argued that litigants, often opt for a “global package”, meaning that they often adopted London as a seat when choosing English as the substantive law. In this sense, London, as a seat, profits from English law’s “certainty and commercial flexibility”.

Another panel member argued that English law had a better approach to the good-faith principle than many other  continental or North American jurisdictions. Citing the traditional debate between “textualism” and “conceptualism”, the panel member argued that successful arbitration spots adopt a textualist approach to the interpretation of contracts. A “deal is a deal” and with no possibility of appeal in arbitration, litigants preferred an arbitrator who clearly interprets the text rather than tries to interpret the commercial reasonableness of the parties.

A note of caution came at the end with panel members citing the major investments in the dispute centres of Singapore or Hong Kong. To them, London would need to keep up with the pace to maintain its leading position.

The 2021 survey on arbitration by Queen Mary University of London demonstrates that London is the favourite seat of international arbitration users. The panel members agreed that English law retains its importance and dominance among common law jurisdictions. Alongside the 1996 Arbitration Act, the judges and the court system in London are highly trustworthy and knowledgeable. Nevertheless, London may remain the leading centre for international dispute resolution, only if it continues to challenge itself – by leading on inclusion, expertise and quality of service delivered to the parties.