After a gala evening at the National Museum of Scotland filled with Scottish gastronomy and ceilidh dancing, delegates returned to the conference centre for the last day of the ICCA Congress. 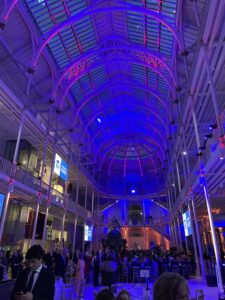 This panel asked: “what can lawyers and arbitrators learn from disciplines outside the law and arbitration?”. That question is particularly timely as the issues being decided by arbitration increasingly require an understanding of areas outside the law, including complex technical and scientific issues, forward-looking damages issues requiring the application of sophisticated economic and finance models, the application of cybersecurity and data protection principles during the proceedings, and the impact this may have on good case management.

Elie Kleiman moderated the session, addressing the concept of cross-fertilisation, picking up on Lucy Reed’s intervention on the first Congress day on the human advantage of adding reasoning to decisions as opposed to relying strictly on self-learning machines. The renaissance human being is associated with philosophers, painters, engineers and more; the renaissance arbitrator today embraces multiple disciplines.

Melanie van Leeuwen used Aristotle’s twelve virtues to explain the character of the renaissance arbitrator: courage, moderation, generosity, magnificence, magnanimity, ambition, patience, truthfulness, humour, kindness, modesty and justice. These come together to show the attributes an arbitrator should strive to possess: a desire to protect the equality of the parties, good humour in proceedings, patience for younger counsel, objectivity, integrity and more.

Kathleen Paisley spoke about how complex modern issues – such as technology, science, allocation of damages and complex regulatory frameworks – impact and influence arbitrators. She noted that many cases turn on a technical question these days, which means that we will all encounter these issues regardless of our own area of expertise. She suggested that we must embrace the law but also vary our skill sets to deal with cases concerning various subject-matters, or engage experts to provide detailed understanding. Members of tribunals with pre-existing experience or interest, she noted, are ideal. For example, the issue of damages today is complex and we have to build our knowledge in addition to relying on the expertise of others.

Janey Milligan provided a history of adjudication as a default and efficient way to resolve disputes, especially in construction, with the aim of illustrating how arbitration might learn and take some elements from adjudication in order to develop. Adjudication benefits from a fixed and expedited timeframe. Ms. Milligan suggested that this encourages succinct submissions and eliminates unnecessary productions. Adjudication is seen as robust, fair and fast-paced, and can address technical nuances of construction due to the expertise of the arbitrators. She accepted that all arbitrations couldn’t be conducted in this way but that it might be sensible if some parts of arbitrations were taken and dealt with expeditiously. Finally, she took heart from young practitioners and their enthusiasm – in her view, they are the renaissance arbitrator, and she concluded by saying “let’s not keep tradition for tradition’s sake”.

Elie spoke to Bruno Guandalini’s paper, as the latter was sadly unable to attend. His paper focuses on human error and the human tendency to rely instead on instinct, as well as on unconscious bias. He asks who, what, why, when, where in the scope of cognitive biases and discusses education and training, awareness, and the need for more empirical data.

The different perspectives offered in this panel, moderated by Chiann Bao, came from outsiders to arbitration: states, the courts, regulators and – somewhat paradoxically – users of arbitration. As Patrick Baeten pointed out, it is telling of how the “inside” thinks if users of arbitration are considered to be outsiders.

Drawing on data from the annual Queen Mary University of London International Arbitration Surveys, and his own experience as in-house counsel, Mr. Baeten gave the user’s perspective. A key finding is that users and parties do not tend to appoint diverse or junior arbitrators because they want the “sure bet” of naming a well-known, prestigious arbitrator. Users also find that arbitrations are too expensive, but that these costs are difficult for users to control. Rather, they think that counsel must commit to affordable and efficient arbitrations. The overarching theme of Mr Baeten’s presentation was that in arbitration, in-house counsel have the potential to be actors of change, but that external counsel are seen to be obstacles to change.

Alvaro Galindo followed with the state perspective. Governments are supportive, passing arbitration-friendly laws and creating arbitration centres and institutions. Mr. Galindo questioned if there is true demand for these organisations as many will never administer a single arbitration. Rather they act more as promotional bodies, indicating to investors that the state is supportive of private international arbitration proceedings and, by extension, a safe destination for FDI.

Finally, Lord Hodge, spoke about how national courts – or at least the UK courts – view arbitration. In the Arbitration Act 1996 and Arbitration (Scotland) Act 2010, the UK has modern, updated laws favourable to arbitration. As finality in arbitration is ostensibly more important than the right decision, the courts take the stance that they should not intervene in arbitral decisions except where absolutely necessary. The grounds for challenging an award in the UK are limited to points of jurisdiction, serious irregularity, and – very rarely – error of law. As a signatory of the New York Convention since 1975, the UK courts recognise foreign arbitral awards and enable their enforcement, though a mechanism allowing the courts to hear questions of unenforceability exists. Generally, the UK is supportive of arbitration, a position made clear by Lord Hodge’s repetition of Lord Dunedin’s words in Sanderson & Son v. Armour & Co 1922 SC (HL) 117: “If the parties have contracted to arbitrate, to arbitration they must go”.

The Great Debate: “A World Without Investment Arbitration?”

The institution of investor-state dispute settlement (ISDS) is under attack. As the world of arbitration reacts, it is not yet clear what reforms will ultimately look like – or whether we’ll see the extinction of the system as we know it today. This event took the form of a debate, with Prof. Dr. Jan Kleinheisterkamp posing to the panellists Carolyn Lamm and Toby Landau KC the question whether a world without investment arbitration would be better. He described the arguments as positions, not truths, and introduced the debate.

Toby Landau KC took the position that the world would indeed be better without investment arbitration and made three main criticisms. First, the economic rationales for the current ISDS system are flawed and do not support it. There is no historical or empirical support for the system as currently devised and there is no evidence that countries have had depoliticisation as an objective. Second, the system suffers from fundamental perceived flaws. These problems are not necessarily real or grounded, but perception in itself is the point. Third, viable alternatives exist, including dispute prevention or ombudsman type processes. He concluded by noting that the arbitration community, as users of the system, do not own it, and the current regime is not theirs to protect. States wanted it only recently and it was not called for by them or investors, and it has no impact on direct investment.

Carolyn Lamm argued the other side. What is depicted as a mass exodus is actually a healthy process, with some withdrawals balanced by some re-joining or renegotiating. The ISDS system needs a vision going forward, which should include focus on climate change and its impact, but eliminating the system is not the answer. Early intervention or an ombudsman can work well together with the system and amending the New York Convention or ICSID Convention would be a process taking many years. Investment arbitration, she concluded, is the past, present and future and it is a viable system, which contributes to job creation, rising living standards, transfer of technology and assurance of due process.

Ong Chin Heng summed up the debate, commentating from the perspective of states. He agreed an ideal world would be better without investment arbitration, but in the real world investment arbitration is a “necessary evil”. However, newer, better alternatives must be considered, taking into account matters such as the equality of arms, as well as issues regarding costs, consistency, independence and impartiality. There is a need for structural reform, he concluded. In this process, the arbitration community should be open minded in what the system might look like and prepared to accept that there is a lot of work to do, taking into special consideration issues such as enforceability and dispute avoidance.

The Congress was brought to a close with a keynote delivered by Lord Carloway, Lord President of the Court of Session and Lord Justice General of Scotland, on the role of the Scottish courts in arbitration, with references to the ideas shared by speakers throughout the various Congress panels.

As the 2022 ICCA Congress in Edinburgh comes to a close, we thank our gracious hosts, the Scottish Arbitration Centre, for welcoming us so warmly to Scotland.

On to Hong Kong from here! The 2024 Congress will be hosted by the Hong Kong International Arbitration Centre and held on May 5-8, 2024. Stay tuned for registration details. We hope to see you there!