Caroline Kenny KC is a barrister, mediator, and arbitrator. She has over 30 years’ experience in commercial disputes. In 2008 she was appointed as Kings’ Counsel and has since been recognised as a Chartered Arbitrator – the only female Chartered Arbitrator in Australia. Caroline’s arbitration experience therefore spans across various roles within international commercial arbitration proceedings, including as counsel, sole arbitrator and presiding arbitrator. These roles spread across numerous jurisdictions. Caroline’s offices are based in Melbourne, Australia and London, England.

In addition, Caroline has held various teaching roles at several prestigious institutions across the globe and has and continues to be involved in many boards and committees. Caroline sits on the Board of Trustees of the London-based Chartered Institute of Arbitrators.

Caroline, it is an absolute pleasure to have you here with us today at the Kluwer Arbitration Blog! 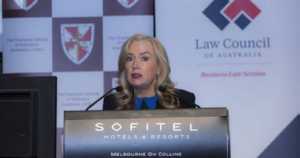 Initially I was appointed counsel in international arbitrations and enjoyed it so much that I decided to take a course in International Commercial Arbitration (‘ICA’). I completed the CIArb Diploma Course at Oxford and then the Accelerated Route to fellowship Course in Chile, Santiago. I now regularly sit as an arbitrator in ICA.

I think it has changed for the better because there is more transparency around the arbitration process. Arbitrators and parties are more concerned with introducing efficiencies in the way in which arbitrations are conducted. When I refer to ‘transparency’ I mean not only the debate about whether awards should be published, but other aspects of the arbitration process, such as the publication of the outcome of challenges to arbitrators and how institutions make appointments. In many ways the ICC has led the drive to more transparency by announcing its default position would be to publish awards and by publishing the name of arbitrators who are appointed. I also think that there is now more competition between institutions and parties to appoint outside ‘the club’ of well-known arbitrators. Institutions, in particular, are concerned with appointing more female and diverse arbitrators. I think the increase in competition for appointments has had a beneficial effect on increasing efficiencies in the way arbitrations are conducted and therefore, lowering the cost of ICA. One of those efficiencies, driven, of course, by the pandemic, is the move to more on-line meetings and hearings. With the improvement in on-line platforms such as Zoom and Microsoft Teams, remote hearings have proved to be very successful, and I think they will continue to be a feature of ICA.

The Australian Centre for International Commercial Arbitration (‘ACICA’) was established in the same year as the Hong Kong International Arbitration Centre and before the Singapore International Arbitration Centre, but as a seat, Australia has not progressed as well as those Asian seats. I think a big difference between Australia and other seats in the Asia Pacific region is that arbitration is not supported by the Australian Government in the same way as the respective governments of Hong Kong and Singapore support them. Although Australia is a bit further than other Asian seats it has much to offer in terms of a stable government, non-interventionist courts, easy enforceability of awards through Australian courts, a highly regarded judiciary, experienced arbitration practitioners, first rate facilities in which to conduct arbitrations and first-rate infrastructure to support ICA including transportation, hotels, and restaurants. I think Australia will only come out of the shadow of Hong Kong and Singapore when the Australian Government provides more support for ICA.

I think the Australian Government needs to support the growth of ICA in Australia, including by providing funding to ACICA, so that, among others, it can employ marketing and other consultants to market Australia and ACICA to the world.

ACICA is very ably assisted by its Director-General, Deborah Tomkinson, its President, Georgia Quick, and all its directors who are very experienced and knowledgeable in ICA. We are all working in various ways to improve ACICA’s profile in ICA. As for CIArb London, it continues to improve its offering to members and this is reflected in the ever increasing membership base – we currently have over 18,000 members world-wide. CIArb offers the ‘gold standard’ in all of its courses and as a board we continually strive to ensure that the courses remain current, of a high standard and easily accessible. We are also continuously updating our technology to ensure that it remains ‘state-of-the-art’ and serves the needs of members. Working on the board of both organisations is very satisfying.

For the past 10 years I have been on the organising committee for the annual international arbitration conference which takes place on the first day of Australian Arbitration Week (‘AAW’). It has been very satisfying to see an increase in the number of delegates attending the conference each year. I had the idea to rotate AAW, which used to be held only in Sydney, to Brisbane, Perth, and Melbourne and that has proved to be very successful. When I was President of CIArb I introduced the Annual Business Lunch, a series of seminars with the Federal Court of Australia and the Annual CIArb Australia Lecture. All those events have proved to be very successful, improved the membership offering to our members and have been important in raising the profile of ICA in Australia.

I think the opportunities for female arbitrators have greatly improved and will continue to do so. Institutions and law firms which have the power to nominate arbitrators have moved slowly but surely away from the ‘the club’ mentality of appointments in previous years. By this I mean that in the past a small number of arbitrators continued to be appointed. Institutions and law firms now realise that to get the best results for their clients they have to tap into the enormously talented field of female arbitrators and make more diverse appointments.

Take small but sure steps in your career, treat triumph and failure both as opportunities to learn, enjoy the ride and always be kind and respectful to others.

Thank you very much for your time, Caroline. We appreciate your valuable insights and wish you continued success!