The International Academy of Comparative Law (IACL) held its XXI General Congress in October 2022. The topic of one of the sessions was Impartiality and Independence of International Adjudicators. The purpose of the work was to assess criteria, mechanisms and remedies applied in the various legal systems (including international courts and arbitration) to ensure the adjudicator’s independence and impartiality.

As it is often revealed by exercises of comparative law, seemingly different approaches may in practice be quite similar, and vice versa: what seems to be equivalent approaches, may turn out not to be so similar after all.

An example of only apparent difference is the use of terminology: while generally an adjudicator is expected to be both independent and impartial, under English law there is no independence requirement. The Law Commission that is reviewing the English Arbitration Act confirmed, in its 2022 Report, that there is no reason to impose a duty of independence (Law Commission Consultation Paper 257, Review of the Arbitration Act 1996 A consultation paper, 2022, chapter 3). Adjudicators should be experts within the field of the dispute, and this implies that they should be active in the field. This means being involved in cases and having contact with other actors. Full independence, therefore, is not desirable. It is sufficient to impose impartiality. This approach reflects the English Supreme Court’s position in the famous Halliburton Company v. Chubb ([2020] UKSC 48).

The difference from the generally recognized approach requiring both independence and impartiality appears to be fundamental. However, it is not as dramatic as it seems, because the principle of independence is usually moderated to an extent that makes it coincide with impartiality.

An example of the opposite comparative pitfall, where it is not necessarily appropriate to rely on similar criteria to achieve similar results, is the ongoing debate on the reform of Investor-State Dispute Settlement.

As known, one of the proposals is to replace party appointed tribunals with a permanent court. This is meant to ensure the adjudicators’ independence and impartiality by avoiding situations where conflicts of interests may arise – often referred to as repeat appointments and double hatting.

A closer look at the criteria for appointing judges to permanent international courts, however, shows that the risks connected with party appointment are reproduced in the permanent courts’ appointment mechanisms– the appointing State being a party to the disputes the appointee will adjudicate in the future.

As long as adjudicators serve on a part-time basis, it will be difficult to avoid appointments of professionals who are active in the field of the dispute – thus giving rise to situations that may be qualified as repeat appointments or double-hatting.

This applies equally to party appointed arbitral tribunals and to permanent courts.

Therefore, suggestions to introduce appointing mechanisms similar to those existing in international courts do not really address the issue. Firstly, a mechanism like that existing in international courts in effect reiterates the mechanism of party appointment. Party appointment was precisely the mechanism that these suggestions were meant to correct (although, as explained above, this is the wrong target of criticism). Furthermore, permanent courts may assume both part-time and full-time positions (which is the correct target for criticism).

If the volume of the cases does not justify creating a court with full-time judges, therefore, the solution will not be found in reproducing the method of appointment of international courts. A more effective methods to reduce the risk of conflicts is to impose restrictions on the eligibility as adjudicators of professionals who represent or act for parties before the adjudication body in which they are meant to sit. Such restrictions are already implemented in some treaties, and the current draft of the ICSID/UNCITRAL Code of Conduct reflects this approach. The restrictions, however, should not be so wide-reaching that they in effect disqualify any professionals with the necessary expertise: it seems sensible to recall the above mentioned English approach, according to which competence is more important than independence and it is impartiality that should be sought.

The complexity of the issue is explained in the General Report, and can be visually summarized as follows: 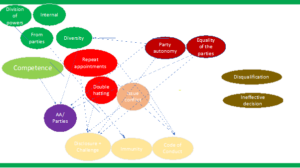