Since the first edition in 2019, Kluwer Arbitration Blog has partnered with London International Disputes Week (LIDW) for the live coverage of an exceptional week addressing topical issues related to the resolution of commercial disputes. 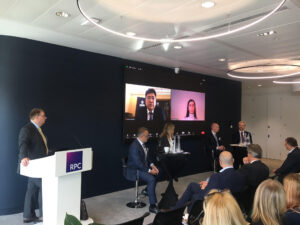 The first panel on 9 May 2022, on London as a dispute resolution hub for disputes involving parties from Ukraine and Kazakhstan: disputes in turbulent times, was also the one to open the first edition of the International Day at the London International Disputes Week. It was hosted by LK Law, QMUL, Quadrant Chambers, Quinn Emanuel Urquhart & Sullivan LLP, RPC, and in person attended at RPC’s beautiful office opposite the Tower of London. The panel was moderated by Prof. Loukas Mistelis, QMUL and Clyde and Co., and with panellists representing both the jurisdictions discussed, as well as London and the London based law firms advising clients from these jurisdictions: Adam Greaves, LK Law; Askar Konysbayev, GRATA international; Tatiana Minaeva, RPC; Olena Perepelynska, Integrites; Epaminontas Triantafilou, Quinn Emanuel Urquhart & Sullivan LLP; and Alexander Uff, Quadrant Chambers.

This session addressed disputes involving parties from Ukraine and Kazakhstan in the current turbulent environment and it broadly considered the role of London arbitration and London courts, the role of English law and how lawyers have been adapting their work in these challenging times.

Loukas Mistelis introduced the panel by framing the discussion being focused on the post-pandemic developments in the face of the ongoing war in Ukraine and the turbulent times in Kazakhstan in January 2022. The discussion comes naturally, as Mistelis explained, as Ukraine and Kazakhstan are frequent litigants before the English courts and the arbitrations seated in London frequently have parties from both jurisdictions. The panellists addressed the effects of the sanctions in connection with the war in Ukraine on the conduct of arbitration proceedings, the recognition and enforcement of arbitral awards in Ukraine and Kazakhstan, respectively, and lastly on the possible proliferation of Crimea-like arbitration cases in the face of the new developments in Ukraine.

Alexander Uff addressed the impact of the economic sanctions imposed by the EU, US, UK, and Switzerland and other countries, on Russia in light of the war in Ukraine, by focusing the discussion from the perspective of arbitrators and counsel. First, Uff mentioned the consequences on the independence and impartially of arbitrators, highlighting that the standard under English law is the absence of appearance of bias, which implies, in light of the sanctions regime, the disclosure of any situations likely to affect the arbitrator’s independence and impartiality. This resulted, Uff added, in some arbitrators having to resign during the arbitration proceedings, while others were prevented from accepting appointments. Further, the imposition of sanctions also raised the concern of eventual conflicts between arbitrators and counsel of parties. Uff clarified that while this situation is covered by the IBA Guidelines on Conflicts of Interest in International Arbitration 2014 when there is enmity between arbitrators and counsel, in practice this mainly concerned situations of conflicts arising because of previous arbitrations involving the same counsel and arbitrators, and not as a result of economic sanctions. Of course, Uff added, arbitrators also have the possibility to exercise their powers to exclude counsel from the proceedings if that affects the constitution of the arbitral tribunal, under the IBA Guidelines on Party Representation in International Arbitration. Uff also mentioned other implications of the war more broadly and the economic sanctions in particular. For example, the smaller pool of arbitrators, less availability of arbitrators and counsel from Ukraine, inability of arbitrators and counsel from Ukraine to travel and for arbitrators to sign their awards etc. Adam Greaves added to Uff’s insightful comments that, from the perspective of counsel, the war in Ukraine put a lot of pressure on law firms in making a choice on whether to continue representing Russian clients or even to continue to take more work involving Ukrainian clients given the screening requirements currently in place. In Greaves’ view, there will be a shift in how law firms will approach these disputes, a specialisation of counsel in these matters involving Russian and Ukrainian clients, and even an increase in the number of smaller law firms which would accept these matters. In any case, in Greaves’ opinion, matters involving Russian and Ukrainian clients will continue to come to London. Tatiana Minaeva explained that law firms are increasingly making their risk compliance processes more thorough and complex, given the implications of the economic sanctions. As such, Minaeva, added, it is not only for potential Russian involvement, but also equally applicable to potential Ukrainian clients. Because these processes are elaborate, they are taking longer than in normal circumstances; this, in turn, has an impact on the appetite of law firms to accept these clients. Epaminontas Triantafilou raised the question whether all these concerns raised are justified. In his opinion, there has been significant market pressure on counsel which ultimately is multifaceted. For example, for large law firms there can also be internal pressure to not accept certain clients because of the position of existing clients towards the war in Ukraine. To this, Loukas Mistelis asked the question – which is the theme of this year’s LIDW – whether London is becoming ‘Global, Sustainable, Ethical?’, and rather ethical in this sense.

Moving to the jurisdiction-specific discussion, Olena Perepelynska, connected remotely from Ukraine, has highlighted the significance of keeping the work flowing for Ukrainian arbitrators and counsel, also mentioning that ICAC Ukraine is currently operational and hearings are taking place, albeit remotely. On the recognition and enforcement of arbitral awards in Ukraine, Perepelynska highlighted the excellent track record of the Ukrainian courts, with a pro-arbitration stance and 90% enforcement rate of foreign arbitral awards. At the same time, Perepelynska emphasized that for arbitrations seated in Ukraine, only 1% of the ICAC awards are set aside by the Ukrainian courts. Askar Konysbayev addressed the recognition and enforcement of arbitral awards in Kazakhstan. While Kazakhstan is a contracting state to the New York Convention 1958, it is only recently that courts have become more familiar with the Convention and its application. The procedure is fairly straightforward and the Kazakh courts routinely enforce foreign arbitral awards. However, as mentioned by Konysbayev, Kazakh courts are still prone to influence and put administrative pressure on the judiciary. As to recognition and enforcement of court judgments, Konysbayev highlighted that this is not that straightforward, as Kazakh courts are not familiar yet with the reciprocity principle, which is not tested in Kazakh courts and, thus, the question remains open.

To conclude the panel discussion, Loukas Mistelis inquired whether we will witness a boom of Crimea-like cases in the near future. Epaminontas Triantafilou mentioned that, indeed the cases based on the 2014 invasion of Crimea may offer hope for future like disputes. However, one must be careful and observe how the situation is evolving, as the current situation is a dynamic one. The war is still ongoing and the effective control, which was upheld in the Crimea cases, is fluid in the present circumstances.

The panel concluded that, indeed, we live in interesting times for the legal profession, dynamic and with significant consequences.