As part of the 2022 London International Disputes Week, Arbitration Chambers, Clyde & Co, Hausfeld, Jones Day and LexisNexis organized a conference on “London as an international disputes hub for Dubai, UAE and region disputes: arbitration and the courts – is it still safe to arbitrate in Dubai, and other hot topics”. 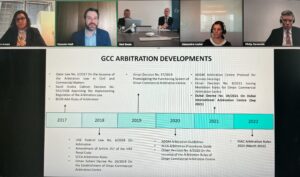 The session focused on key topics from the world of dispute resolution that are particularly relevant to Dubai, UAE and Middle East region disputes. In particular, the panel engaged in a fruitful conversation on: (1) the attractiveness of Dubai since Decree No. 34 of 2021 from the perspective of international arbitration users – either counsel, arbitrators, or parties; and (2) the development of commercial and investment arbitration in the Middle East region.

The panel expressed mixed views on the most significant transformation in the region in 2021, namely Dubai’s 2021 Decree No. 34 Concerning the Dubai International Arbitration Centre (“Decree”, previously discussed on the Blog here and here).

Some members of the panel expressed concerns over the Decree. They criticized the way it came into force, without prior consultation with the arbitration community, a certain lack of transparency concerning its promulgation, and its impact on ongoing arbitration cases, including challenges those related to arbitral costs.

Other members adopted a long-term approach to the Decree, emphasizing the much-needed clarity it brings to the UAE jurisdiction. They view the unification of Dubai’s different arbitral institutions under the umbrella of an improved DIAC with a revised set of arbitral rules and the clarity on the supervisory court as essential developments in the long run for the attractiveness of the seat.

Regarding whether Dubai could retain its top-10 position as an international arbitration hub (as ranked according to the 2021 Arbitration Survey by the School of International Arbitration at Queen Mary University), the panel members were cautiously optimistic.

Dubai is a unique jurisdiction, with its confluence of common and civil law and its position in a thriving region with strong arbitral development – all natural reasons which suggest Dubai remains an attractive seat. The panel members nevertheless emphasized the need for greater transparency, outstanding level of case management and service to the parties, and a strong autonomy for the arbitral tribunals as conditions for the attractiveness of the seat, particularly for foreign nationals or entities that are not registered in the seat of the arbitration.

From a historical perspective, the Decree was seen as a “hiccup” on the long road of UAE and the Middle East region in their relationship with arbitration. A member of the panel reminded the audience those 75 to 80 years back, UAE was not a welcoming arbitration environment, especially for disputes concerning the oil & gas industry. In hindsight, the 21st century has seen a spectacular effort from an institutional perspective, with significant investments put in place to support arbitration in the region.

Nevertheless, for users of international arbitration in Dubai, the Decree came as a surprise, if not a shock. The agreement between LCIA and DIAC on ongoing cases provides that the LCIA will continue to administer all existing cases under DIFC-LCIA rules from its London offices. However, the main issue remains the interpretation of arbitration clauses that mention the DFILC-LCIA rules and the present circumstance’s challenge to party autonomy. Similarly, some considered that the Decree might create windows of opportunity for other arbitral seats, either in the region or in globally well-established arbitration jurisdictions. For example, London would be a natural choice for users of international arbitration that seek as a stable and transparent seat.

The Middle East – An Arab Spring for commercial arbitration and investor-state arbitration?

The panel agreed that the Middle East region saw a spectacular increase in arbitral institutions and laws across the last decade, if not in the last five years – for instance, the addition in 2018 of the Oman Commercial Arbitration Centre.

One panel member mentioned the recent Israel-UAE BIT and referred to it as a token of appeased relationships, reflecting developments in the region more broadly. This growth in investment arbitration was comparable to a sort of Arab spring, i.e. a response to corruption and economic stagnation – two ills that investment treaties seek to cure by securing the rule of law.

In the region, most ad hoc cases are pursued under UNCITRAL rules, suggesting that the DIAC could be a neutral institution for administration, and one that could be more popular than other options, particularly for Russian parties.

The Middle East region is a space to watch with its significant developments both in commercial and investment arbitration. Some panel members expressed concerns about the immediate and middle term outcome of the latest Decree, particularly regarding the transparency and stability of the arbitration framework in the UAE – making London perhaps appealing to some users. They were nevertheless cautiously optimistic about the long-term potential of the region and UAE for arbitration.