London International Disputes Week continued on 11 May 2022, with a session focused on ESG – regulatory, practice, and risks. 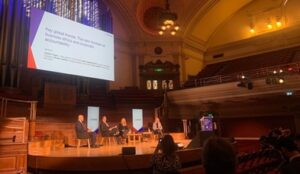 The chair kicked off the discussion by noting that ESG is increasingly going up the radar as it presents lots of positive opportunities for growth for companies. Though at the same time, it also brings risks to corporate organizations. She proceeded by mentioning litigation, regulatory, interventions, and reputational communications as examples of what can happen when ESG regulations are not satisfied. Hence, this panel discussed what ESG looks like, what drives it, and whether it is proven to be effective.

The panelists approached the topic by limiting the scope of their discussion to the following three sub-topics.

First, Adam Heppinstall QC elaborated on what ESG litigation risk looks like and how it will develop in the coming years by highlighting the judicial practice in several jurisdictions. In the Netherlands, for example, he mentioned the prominent case of Royal Dutch Shell as an example of how soft law, namely UN Guiding Principles on Business and Human Rights (UNGP), can lead to a potential change made to the EU derivatives. He proceeded to mention the tendencies in Germany and Norway, in particular why the parent companies may be liable for violations of ESG policies and not just their subsidiaries. Adam Heppinstall QC highlighted that it is mostly due to the legislative innovations in the named jurisdictions. Dan Lambeth picked up on that point and mentioned that the reputational aspect can outstrip the litigation timetable process. He noted that it is important to take the materiality analysis first. He emphasized that under the categories of “E”, “S”, and “G”, there is a wide range of issues which might be relevant for a certain company depending on the sector. He continued that for most companies, it is not enough to simply produce a report, they have to tell the story around it and set the narrative. He jokingly noted that if a client talks about its aspiration to invest in education in sub-Saharan Africa and in the meantime is involved in oil exploration in the Northern hemisphere, that is what the conversation about the narrative truly is about for that company. Brooke Hopkins weighed in on the role of ESG in the US, which has been highly politicized. She noted that the Department of Justice has introduced proposals around regulation with ESG, which, as she noted, will probably not be implemented in the nearest time; though, even with it, the US takes a principle-based approach. Brooke Hopkins underscored that most of the aspiration to implement better ESG practices comes from investors and consumers. She concluded this thought by stating that clients worrying about litigation or wanting to create ESG values comes not so much from the regulatory but more from the investors saying “If you want to continue to have funding – you must show us how you are moving in that direction of sustainability”. And, she continued, in the US there is currently a wide practice of companies taking advantage of publishing sustainability reports, which are visually pleasing, but nothing more as usually lack the data to back up the reports.

Second, the panel addressed the correlation between business ethics and human rights. Dan Lambeth mentioned that there are three triggers of ESG, being legal and regulatory disclosures; expectations from the financial community; and NGOs who are increasingly partnering with the private sector. As an example, Dan Lambeth noted that some NGOs are questioning companies’ presence in Russia, their assets, and contributions to humanitarian aid, as Ukraine has a strong impact on ESG and human rights. Brooke Hopkins emphasized that in the US one of the things they are attempting to transition from is that the purpose of a corporation is to create a shareholder value, which, as she noted, is very short-term; while ESG plays in it to create a stakeholder value, which is a much longer-term.

Third, the panelists elaborated on ESG activist litigations and the role of the courts in enforcing business ethics. Brooke Hopkins mentioned that when it comes to activism in the US, the consumers are using it in a way to demonstrate their power, while some companies are using it to simply show that they are “green”. As per the role of the courts, Adam Heppinstall QC referred to the Dutch and New Zealand judiciary as examples of societal pressure and the need to take some action. Even more, when the Human Rights Act has been ratified in New Zealand, the society put pressure on the judiciary to create a tort through Article 8. He proceeded by mentioning that NGOs have a new place in this litigation landscape, and there is now a “triangle” between NGOs, lawyers, and funders. He commented on an interesting case before the French courts where the Casino supermarket chain is litigating with the assistance of an NGO which found a way to monetize the claim to the actual loss. Adam Heppinstall QC then summed up that currently, lawyers are trying to catch up with the developments in ESG regulations.

The panelists concluded by stating that there are a variety of directions to follow in terms of being sustainable, and it is important and needed to build a harmonized framework of policies. Brook Hopkins emphasized that ESG shall be tailored for the company, as it is not useful to build a “cookie-cutter” in the long run. While a “cookie-cutter” will give a direction of development, it will not necessarily be the best option as a long-lasting policy for the company.

Second Panel Discussion: The growth of ESG: the future for in-house and private practice litigators 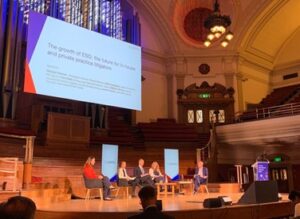 The chair started by asking the speakers what are the big ESG issues that are keeping them awake at night.

James Thorne commenced by noting that ESG is a very broad concept and the short answer to the question would be – supply-chain is a big issue. While a longer answer would be some issues related to social and human rights matters, what is the scope of the carbon footprint, and how climate change can impact the suppliers in the future. He noted that on the one hand, it is ESG issues that are connected to the changing regulatory framework, and on the other hand, the practice. Melissa Strong proceeded by stating that greenwashing is a major issue. She further mentioned Sections 90 and 172 of the Companies Act which are very “uncomfortable” types of claims. Holly Gavaghan thereafter emphasized that the carbon footprint is very relevant within the ESG policies. From OPUS2 perspective, data security is the key risk in this context as it is sometimes included in the “G”. Notably, OPUS2 has recently launched an investigations platform with Linklaters and data security is enshrined in their policies. She further mentioned the Greener Litigation Pledge and the Arbitration Pledge as very relevant to the “S” of ESG. Holly Gavaghan emphasized that these pledges not only raised awareness about the issues but also addressed them. As per the Greener Litigation Pledge, virtual hearings and electronic bundles are some examples of how the carbon footprint can be minimized. And as per the Arbitration Pledge, she noted that in 2015 female arbitral appointments were at 12.2% while in 2019 they increased to 21.3%.

The panelists concluded by stating that in terms of innovation and aspiring practitioners, it is important not to go backwards. Melissa Strong noted that although there is environmental diversity at the moment, it is not necessarily compatible with a lawyer’s private life. In particular, it may not always be the easiest to travel to attend a hearing when it otherwise can be held remotely. She proceeded by noting that it has not been easy to adapt to the innovations as there is a whole training process to cope before it becomes a natural environment. Kay Majid noted that it would be refreshing to have new ideas and approaches toward ESG. James Thorne highlighted that the skillset of the users is also important; lawyers must be more contentious, and the junior lawyers should be getting such training as well. Holly Gavaghan concluded that we all are on a journey and there are certainly positive changes.