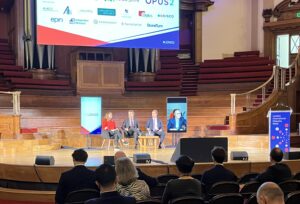 On the second day of the 2022 LIDW, LIDW members gathered in the Westminster Hall Center to discuss this year’s topics: Dispute Resolution – Global, Sustainable, Ethical?

The speakers boldly addressed the hot topic of climate change and the sustainability of the arbitration practice.

Lucy Greenwood started by citing John Fitzgerald Kennedy: “For time and the world do not stand still. Change is the law of life. And those who look only to the past or the present are certain to miss the future”. She called for an essential rethinking of the arbitration practice and its impact on climate change. To her, the arbitration community is part of the global problem and has not sufficiently changed how it runs its practices since the 1990s. While the average carbon footprint of citizens in the UK is 12 tons of CO2 per year, one return flight to New York in business class is equivalent to 7 tons of CO2.

When unnecessary to resolve the dispute, one should avoid travelling, printing, taxis, or even disposable coffee cups. While the pandemic has been a major temporary change, climate change is here to stay. To avoid the catastrophe, we do not have any other alternative than adapting and reducing our carbon footprint. Whatever the reason to change, whether to be more relevant, modern, attract new clients, or be more efficient, making the change is essential.

Jenny Hindley gave striking examples of simple steps to reduce the impact of the litigation practice significantly. For instance, she mentioned a study that showed that a medium-sized arbitration would need to plant 20 000 trees to cover the CO2 emissions it produces. One of the major factors is hearings. According to the speaker, international physical hearings produce 19 times higher emissions than virtual ones. Another example was that one single arbitration wasted, on average, 3000 disposable cups of coffee, equivalent to one ton of CO2. She called the audience to take a step back and consider how we work. Signing the Green Pledge and committing to producing less CO2 emissions is a good way to start, while remaining flexible enough to tailor the lawyer’s service to the clients’ needs.

John Sturrock asked the audience how they felt when called to change their habits. He wondered whether the keynote made the audience uncomfortable and whether “we should bother at all?” Reminding the audience of the facts of climate change and the now very clear science, he asked where it would leave us and others on the planet if we did not change. “If not us, then who?” he asked. After all, “people like us” need to change; and think beyond reusable bottles, towards a complete redesign of the legal practice. He mentioned that World Mediators Alliance on Climate Change had attracted 600 signatories from 50 countries. To him, mediation could be a greener forum in the net-zero transition. It is quick, less resource intensive, worked online during the pandemic, and provides a useful route to explore commercial and non-legal options.

Conference on Climate Change as a New Disputes Landscape

The panel focused on disputes that may arise from climate change and energy transition challenges, including:

It was argued that the most critical goal for states in fighting climate change is to reduce emissions to the lowest level possible, which requires a major energy transformation. States have one carrot and a stick to achieve the objective: incentivising low emissions energy industries is the carrot, restricting and phasing out high emission industries is the stick.

The question was whether it allows states to enact the green transition without being penalised under international investment law.

Under the current international investment law, investors in the energy sector are equally protected whether fossil-fuel based or renewable-energy based. Indeed, the goal of Bilateral Investment Treaties (BITs) is to protect foreign investors and ensure they will economically thrive in the host state. BITs thus raise the question of whether they limit or chill regulatory changes, preventing governments from undertaking the necessary action towards the energy transition.

The two recent claims against the Netherlands for its phasing-out policy demonstrate that ambitious climate regulations adopted by states can be subject to international review. This may reinforce the idea of regulatory chill.

Despite potential damages under BITs, not taking regulatory action to curb climate change will be more expensive for everyone. In that regard, it was advocated that while adopting new treaties and amending others is a necessary task, it requires time, which we do not have under the current climate circumstances.

Magnusson was concerned that the Energy Charter Treaty protects all sources of energy equally, a “clear misalignment between legal systems”. In the Climate Change Counsel’s report on climate change and the ECT, the striking finding was that no arbitral award had included climate change law and objectives (Paris Agreement, Tokyo Protocol) in its legal reasoning. However, she noted that those tackling climate change must use imperfect tools as best they can.

The panel then moved to the corporate perspective on environmental regulations.

Thanasi Trantas argued that companies are increasingly being required to disclose key information on their carbon footprint and sustainability level. This information can be crucial to stakeholders, showcasing the impact of climate change concerns on business.

He argued that the increase in environmental disclosures is driven by several factors, including:

It was argued that accurate disclosures are of the essence to avoid risks. Otherwise, they might lead to litigations related to misinformation or misrepresentations. For example, in some jurisdictions, such as the US, the accuracy of environmental disclosures can be subject to class action litigation.

Additionally, the importance of avoiding greenwashing was underscored. Greenwashing can be understood as the practice of misrepresenting green credentials. As public society is increasingly interested in greener and more sustainable products and services, businesses risk litigation for misleading representations to customers regarding the sustainability of specific services or products. Nevertheless, this area is still developing because the taxonomies of what is a “sustainable” product or service are not yet finalised.

Thanasi Trantas emphasised that corporate directors may also face risks from climate litigation. Climate cases against directors could be filed in connection with their fiduciary duties. Shareholders are increasingly threatening claims against company directors for failing to address climate change. Therefore, litigation could be used by shareholders to force directors to undertake further environmental actions.

Piers Rake reminded the audience that the present circumstances presented features of “a perfect storm”. It is difficult to imagine governments focusing sufficiently on the Net-zero strategy with global economic stress, striking inflation, governmental debt, drop in economic growth, food crisis, or Covid-19 lockdowns. In that context, it was emphasized that trust is an essential element of the energy transition. The public must have confidence in the actions and investments undertaken by states and companies to curb climate change.

At the end of the session, the panel was divided as to whether arbitration could offer an appropriate forum for climate change disputes. While arbitration generally provides the possibility of having the expertise and – arguably – the speed necessary to address these types of disputes, it is important to note that climate change disputes have been historically driven by public litigation and public pressure. Thus, confidentiality in arbitration might not yield good results in bringing about a change to the general protection of the environment by states and private companies.